How it all started...

In 2009, the New Year saw the start of something new for Morris Minors in the Mansfield area when the Morris Minor Owners Club It all started with a chance meeting between Paul Temple and Graham Hutchinson.

One day while at work, Paul thought he was seeing double! RDV 461, his 1954 series II was parked outside the shop when, through the corner of his eye he spotted an identical car whizzing – well more ‘majestically gilding!’ – past the shop window. This was his first meeting with Graham Hutchinson, a retired businessman who lives just around the corner! Paul and Graham chatted and as the summer progressed it became obvious that Mansfield was not as short of Morris Minors as we had first though. It was clear that an official Branch for Mansfield Minors was in order.
After much help and assistance from the MMOC we held our first meeting in March 2009 with an excellent turnout and here the name MADMOG was adopted! Since them we have gone from strength to strength, our number grows almost monthly and we are always up to some fantastical project, be it working on our Branch Avenue Stand or holding quiz nights or runs out. 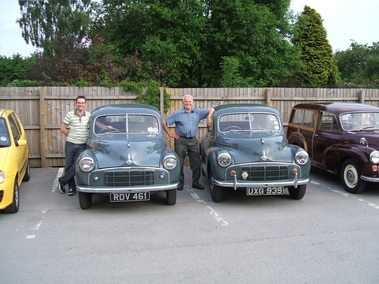 Two of a kind….Paul and Graham with their 1954 Series II’s 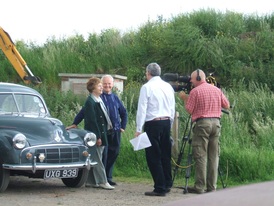 Before the National Rally June 2009 a number of us, along with other enthusiasts visited the Nottinghamshire Minor Centre where a segment about the 60th anniversary of the Morris Minor Car was being filmed for BBC East Midlands Today.

You can visit the link and watch the interview with Paul and Graham here http://news.bbc.co.uk/1/hi/england/7466620.stm

Filming of TV interview with Graham and Ilsa Hutchinson in progress

A branch is an official arm of the Morris Minor Owners Club. You do not have to be a member of the MMOC to join a branch although there are benefits. Our group is a very social one with the emphasis on fun and fellowship. The membership ranges from early teens to 85+

We meet monthly and hold different activities throughout the year.You can see our programme for the coming year here
The branch hosts an Annual Rally, an annual picnic, Quiz Night and much more. We always welcome visitors from other branches or those that just want to come and meet us. You are welcome whether you own a Morris Minor or not!